Have been in Spain for 5 days. Arrived in pounding rain in San Sebastián and holed up waiting for the weather to clear. It ain’t gonna happen, but the rain has slowed a lot. San Sebastián is a fabulous old city. Easy to spend an extra day her but now have moved on by train to Pamplona and the start of the Camino del Santiago.

We are among thousands of pilgrims walking and riding The Way or The Camino or The Path. 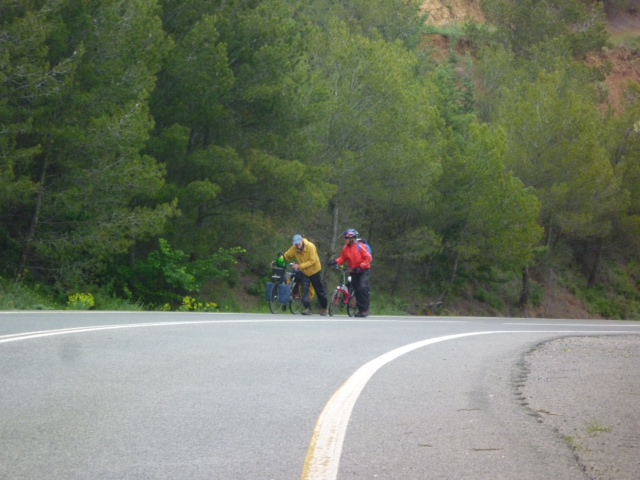 If Cosmic Ray is walking, I think most of us would be also walking…

The only words to remember are “Buen Camino”, whether you are from Vietnam Nam or Prague or Moscow or Brazil or Japan or Argentina or Flagstaff, Arizona. We are pilgrims on the path to the cathedral in Compostela, 400 miles to the east.

Marcia, Elena and others,

I thought you’d like this. It’s a small lake in a nature area near our hostel in Biaritz, France. We made it it Spain in a pounding rain, riding lost most of the first half of the ride on beautiful quiet roads near the coast. After crossing into Spain, the weather went to hell and so did the route. The next 25 miles was freeway, high speed roads in the rain with trucks loaded with Spanish steel and such whizzing by and throwing up spray. Our rain gear did pretty well but we got exhausted. Then we arrived in San Sebastián after a series of smaller towns.

This city is rather small, but fabulous. It will be part of the story for Flag Live in about 10 days, so I’ll skip it for now, but I could easily write 1000 words just about SB. We found a really comfy suite of rooms for $35 each. It was lucky because it was a weekend with a big football game, pouring rain and nothing else available. We are enjoying the city and the much cheaper Spanish prices.
We plan to spend an extra day here to wait for the rian tomstop, get things together before we train to Pamplona and begin the 450 mile Camino del Santiago.

I’m unsure of the wi-fi along that route, but I will try to stay in touch. If you are curious about The Camino, there is a movie with Martin Sheen called The Way on NETFLIX. I’m sure you’d like it.

If you want to read more about our adventure, check out flaglive.com

All the best from here on the road in Spain,

I’ve learned to pronounce this!

Wow what a couple of days. First I find €25 in crumpled notes. Then I crash nearly breaking something but only a little blood leaked out. Then a 40 mph tailwind to Agde and Sete.

Camped last night. Met a wonderful couple from Germany. Spent the day with them. Moules for lunch. YUM!!!

Hostel in Sete tonight. Here tomorrow than train in the rain across the southwest of France to Biaritz next to Espana.

Found Elson here at the hostel. They always put the hostel at the top of a hill, but this is ridiculous. I would need a ski lift to get to the top. Gorgeous view though.

It felt like a book sitting there, open to an unfinished chapter. A chapter just waiting to be written to put the finishing touches on the story.

You see, Franklin didn’t make it home with us.

A week earlier it just felt good touching the surface of the cold rock. Jeff Peabody and I came to the North Rim of the Grand Canyon to climb Mount Hayden, a beautiful 400-foot tall spire. From high above on the Canyon rim, that big rock looked daunting.

A somewhat wretched two-mile scramble through a jail cell of spiky locust bushes from Point Imperial brought Jeff and I to the base of the monolith. I, being an extremely novice climber, was scared.

Until I touched it. It felt good to touch it.

For whatever reason, I was calm once I had my hand on it. It somehow became more real. Just like those other climbs. Except three times as long, and it stands high above the greatest hole in the world, its summit at 8,372 feet.

Jeff was stoked. While maybe his “most rad” climb, this one wasn’t going to be his most challenging. He’s climbed for years and is a rope access technician.

Once we started the route, with the exception of a few “oh shit” moments from me, and some cussing from Jeff ignited by his new found love for the bushes on the side of Hayden and the rope problem they create, everything went smoothly. And after not too long we found ourselves topping out at the most incredible place. 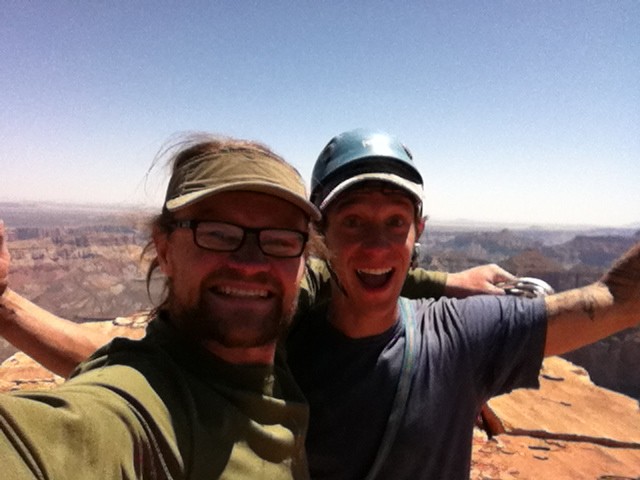 It felt good to take those climbing shoes off, and to step barefoot onto the sandstone surface. Jeff did his now signature headstand, and we sat dumbfounded for what was probably and hour yet seemed like 5 minutes. It felt like we were perched at the top of the world.

We signed the log book that was tucked under a rock cairn. There was a note from our buddies Brian and Frosty who had reached the summit the day before.
“Team Camhands,” it read, got to the top on their “1st Attempt,” and in “1st Place.”

The challenge was to see which team could do it first. Three teams organized to make the attempt. It was more of a way to get us to do it than an actual competition, but it worked. And no plans were shared, yet we reached the top a day apart. Guess they won. And guess it was easy.

But the climb was only half-way complete.

The rappel was to be three pitches. Rap stations were set up along the best way down, we just needed to find them. We didn’t. Yet we were fortunate to find remnants of someone else who also missed the route. Two old, weathered hexes plugged between a crack would serve as our final rappel anchors.

The hitch came when we pulled on the rope. Normally, a climbing rope comes down when you pull on it. Ours did not.

The look on my very experienced climbing partner’s face was one I don’t care to see again. Jeff had never looked “concerned” to me on a route before. He’s always cool and in control. So this was a real problem, I gathered. I was calm, but only because I had no freaking idea what to do or how to get down.

After considering ascending all the way up the rope to see what the snag was (probably one of those “F#&$ng bushes!”), Jeff thought back to ropes class and built a pulley system to gain a mechanical advantage. It worked! And after pulling the rope down, foot-by-foot using all of our body weight (Well, mostly Jeff), we had the rope back and rappelled the remaining 200 feet on those scary looking hexes. Thank god they held so we didn’t have to leave any gear, or worse, plummet to the ground. .

The scramble back to camp left us as tired as we agreed upon that we’d ever been in our lives. Eleven hours of hiking, scrambling and climbing left us completely spent. We were in the tent about two minutes following sunset and it was hard to make it that long.

During the hike out I had turned to Jeff and said something like; “OK, this story is over. No more anything out of the ordinary can happen.”

He agreed, but one member of our party who wasn’t present obviously didn’t get the memo. Franklin, our buddy Shane’s 1985 Toyota Land Cruiser, who earned a name after being so awesome over the course of several adventures, suffered a few injuries and didn’t make it home.

Early May finds Arizona Highway 67 closed for the winter at Jacob Lake. Anyone wanting access has to find another way in via a snaking system of forest roads. It is doable, especially with a beast like Frankie, but this time it came at a cost. During the approach, a four-mile stretch of nasty snapped the right shock and shock casing. Franklin still drove well, and we had no choice but to continue on, so we did.

On the departure, however, we needed to hop a tree that had fallen over the road. It was not too big to jump but way too big to move. We put Frankie into low-4 wheel drive and over we went. Uneventful.  But after we put him back into 2-wheel high, he wouldn’t go faster than about 30 mph without acting his age, revving the RPM meter close to 4,000.

We limped into Jacob Lake and the service station there. Unfortunately, like the Canyon, the station doesn’t open until mid-May. Fearing the 160-mile drive back to Flagstaff in a crippled vehicle, Jeff and I took an offer from a guy named Eric, who was heading to Sedona from Jackson, Wyo., leaving Franklin behind.

A week later, Franklin sits on the flat bead of a tow truck. He was finally heading home. Covered in dirt, broken leg and bruised innards. Looking tired.

The cost to tow was roughly $140. The cost for repairs remains unknown. No matter what expenses are coming, short of Franklin being broken forever, climbing that rock was worth it. The feeling from climbing Hayden, that feeling of adventure, still resides in my soul as I contemplate the whole thing. It still feels really good. I’m sure it’s the same for Jeff.

A wise man once said, “Its not an adventure until something goes wrong.”

Adventura, what must happen. I like that, no matter what.

It feels really good to have Frankie home.